The Panama Hat is made out of toquilla straw that comes from a tropical rain forest wild plant with the scientific name of Carludovica Palmata. The plant grows only near the coast of Ecuador, between 100 and 400 meters above sea level.

The lowlands of the Manabí Province provide ideal conditions for the growth of this plant: rich soil, right amount of moisture, cool air and shade generated by other plants.

The Carludovica Palmata takes 3 years to achieve maturity and it’s stalks reach up to 8 feet high. After this time, harvesting can done in cycles of around 30 days since during these times new leaves are grown. 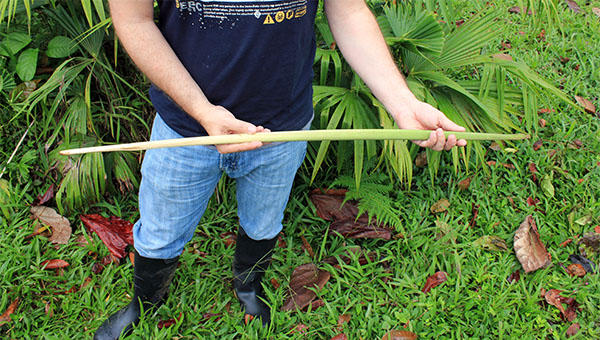 The new shots found towards the base of the plant are the ones that are selected since they are thinner.

To ensure the quality of the straw, harvesting is done during days in which the leaves hold less moisture and are lighter. With the use of machetes, the new stalks are cut by hand, bundled and transported by horse or truck to weaving villages. Each stalk contains wrapped fingers of a large compound leave.

Stalks are opened and the inner leaf fingers are separated and split into dozens of thin straws attached to the leaf stem.

The prepared stalk is then cleaned and boiled in a big pot of water for about an hour and then hung to dry.

With the straw ready, hats are woven outwards from the centre of the crown using a wooden crown form as support. Thinner straws are selected for weaving high quality hats so a Top Quality Hat can take up to three months while a budget Cuenca Hat can be finished in a couple of days.

After weaving is finished, the excess of straw that remains hanging from the brim is then weaved backwards (towards the crown) forming a thin but strong band around the brim. The remaining straw of the brim is then cut with a razor blade as well as the straw ends of the inside of the hat.

The hats brims are then ironed to even out the weave and remove any small undulations in the straw. Montecristi Hats are also ironed with a little of sulfur in order to lighten de color of the hats.

The different shapes of the hats such as the Fedora or Colonial forms are shaped with the use of a steam press, however some Montecristi Hats are still blocked by hand using iron over a wooden form.

Finally, a ribbon is attached to the hat and an internal band is sewn before the hat is ready for sale.